Let’s get down to it. Is Captain America: The Winter Soldier as good as The Avengers? To me, it’s an apples and oranges comparison. The Winter Soldier is a different kind of movie. Though hardly lacking in action sequences, it’s a slower paced, more human movie. The quiet moments are my favourite. Steve Rogers (Chris Evans) commiserating, soldier to soldier, with Sam Wilson (Anthony Mackie). Natasha Romanoff (Scarlett Johansson) asking Steve whether that was his first kiss since 1945. And Steve’s heartbreaking reunion with an elderly Peggy Carter (Hayley Atwell).

Still, the action sequences are quite something. The hand-to-hand fight scenes are breathtaking, Nick Fury’s (Samuel L. Jackson) long chase sequence is highly entertaining, and the big action at the climax is satisfying, though a bit predictable. 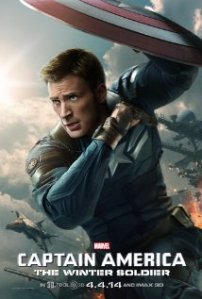 And there’s more. SHIELD may have been infiltrated, but by whom? And to what end? The answer will have reverberations throughout the Marvel Universe, and will have to have some impact on TV’s Agents of Shield. Cap, the Black Widow, and the Falcon are on the run, hunted down by their own. They can’t tell the good guys from the bad, except, as Cap points out, if they’re shooting at you. Yes, there’s humour in the movie as well.

The Winter Soldier allows the actors to more fully develop their characters, has an interesting story, great action, and changes everything. What more could you ask for in a “comic book” movie?