Binge watching became a thing when DVD releases of full TV seasons appeared. Got a free weekend? With 22 episodes to watch at about 45 minutes per, that’s about 16 hours. Eight hours a day. Easy peasy. Watching episodes back-to-back really does let you sink into the situations and characters, and it’s a particular boon if there’s a complex backstory that you need to keep straight as the season progresses.

I think our first such binge (not actually over a weekend, but maybe spread over a month) was season one of Heroes, a show dripping with brilliance and originality. Too bad it completely lost its way after that classic first season.

Fast forward to the present: The summer of Veronica Mars. Having only vaguely heard of the TV show, my curiosity was piqued when the Blu-ray of the 2014 movie generated a lot of great reviews. I purchased the pilot episode from iTunes and was hooked. Then I discovered that all three seasons were on Netflix Canada. Score. 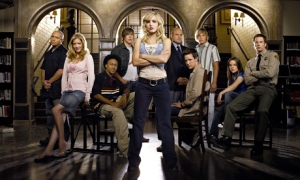 Veronica Mars is the daughter of Keith Mars, a private investigator and former sheriff of the fictional town of Neptune, located somewhere between L.A. and the Mexican border. Veronica, a 17-year old high school student, is no slouch in the detecting department herself. In the setup for season one, her boyfriend dumped her, she was ostracized at school, raped, and then her best friend was killed. But by whom? Sounds pretty dark, doesn’t it? But this a show that is alternately dark and humorous, with three-dimensional characters, great drama, and layer upon layer of mystery. The ensemble cast is nearly perfect, in particular, Kristen Bell as Veronica, Enrico Colantoni as Keith Mars, Jason Dohring as the troubled and always in trouble Logan Echolls, and Francis Capra, the motorbike gang leader with a soul.

Creator and writer Rob Thomas, with his ability to handle an ensemble cast and provide high-quality stories with a mix of humour and drama, was starting to make me think he could give Joss Whedon a run for his money. And oddly enough, just as that thought occurred to me, who should make a cameo in one of the season two episodes but Joss Whedon? Maybe Joss was checking out the competition.

Looking for a writer for the Avengers post-Whedon? Rob Thomas gets my vote. Meanwhile, you could do a lot worse than check out this great show. My wife and I are nearly finished season two. Once we finish that and blast through season three, I’m quite looking forward to the movie. And then, well, it’ll be time to get into series-canceled-before-its-time mode (*cough* Firefly *cough*) and pine for the day when they might make Veronica Mars 2.