Leonard Nimoy was many things, actor, director, photographer, author, even singer. But above all, for those of us who knew him only by his work, he was Spock. 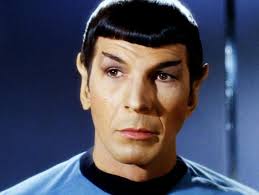 The genius of Nimoy was that, when he played Spock, the actor seemed to disappear. There was only Spock. And we loved Spock. Spock was supremely logical, but let the mask of logic slip just enough to let us know when he was angry, bemused or exasperated. He, Kirk, and McCoy formed the perfect trinity of logic, intuition and emotion.

Nimoy made an appearance via Skype at last summer’s Ottawa Comiccon, an appearance that Karl Urban (McCoy in the new movies) crashed, to Nimoy’s amusement. I wish I could have been there. I recently visited Los Angeles, and saw the handprints left by the cast of the original Star Trek. Nimoy’s of course, formed a Vulcan greeting. Though at one time he wrote I am not

Spock, he came to embrace the role for which he was so loved, and later wrote a  book called I am Spock.

My favourite Spock episode? The Menagerie, in which Spock, still loyal to his former Captain, risks his career to help return Pike to a planet declared off-limits by the Federation. Another favourite was his fabulous return to the role in Star Trek, the 2009 movie. Then there’s the the famous Audi commercial he filmed with Zachary Quinto. What a great sport he was.

What else is there to say except