While writing the latest installment of my serialized FanFiction novelette, a crossover of Firefly and Castle, it seemed a good time to ruminate on serial writing in general.

By all accounts, it was Charles Dickens who popularized the notion of serial writing. His first novel, The Pickwick Papers, was published in monthly installments from April 1936 to November 1937. Installments of most of his other novels were also published monthly; some were published weekly.

At the time, it was advantageous to publish serially for economic reasons. Books were expensive; by breaking a novel into installments, readers could effectively amortize the cost over time. Dicken’s experiment was a success as Pickwick proved wildly popular, and numerous other Victorian authors followed suit.

Times change, and although paperbacks seem expensive these days, they provide good value; at roughly the same price as a movie ticket, they provide many more hours of entertainment. 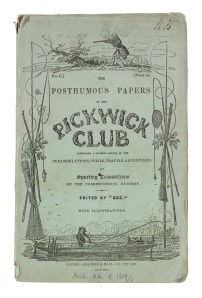 money is no longer a factor (and there are readily accessible public libraries if it is), are there other reasons to serialize a story? Here’s one: to get early feedback from readers before the entire story is cast in concrete. Suppose, for example, a given supporting character excites a lot of comments. You might be inclined to expand that character’s role in later installments. In the case of Pickwick, Dickens did just that after the introduction of Sam Weller. In the case of non-commercial fiction, you can simply abandon the project if it appears to be a dud. Life is too short, and there are too many stories to be told.

We are already used to many forms of serial media. Television shows may have season-long (or longer) story arcs. It may take two, three, or more movies (pick your franchise) to tell a complete story. Then consider the numerous online comic strips with long story arcs. For example, followers of the Writing Excuses podcast will be familiar with Schlock Mercenary. With all that in mind, a serialized novel doesn’t seem like much of a stretch. And after all, people are busy; a serialized novel can seem more palatable in that it provides smaller chunks that are easier to digest.

Serialized commercial novels are relatively rare these days, but they’re not dead. The latest novel in John Scalzi’s Old Man’s War universe, The Human Division, was published in weekly installments in ebook form. The complete novel was later published in book form along with original material that was not previously published. Naturally, Scalzi’s ebook readers weren’t pleased that the novel contained new material. Would they have to pay all over again for the book? It turns out not. The two “new” chapters were made available online. In fact, one of them had been available online for some time.

In the non-commercial world of FanFiction, I would guess that most stories are published in installments of a few hundred words or more. FanFic authors have day jobs. Or day classes, depending. Still, writing FanFiction in installments has its pluses and minuses. Among the pluses, as discussed earlier, is the possibility of early feedback. If you lack confidence in your writing, early, positive reviews can be very encouraging. You also get a sense of accomplishment as you see the posted chapters pile up. At fanfiction.net, you can receive an email each time a new chapter is posted, making it easy for readers to follow the story.

Another plus, this one specific to fanfiction.net, is that every time you add a new chapter, your story bubbles up to the top of the list. So really, it is a very effective way to attract new readers that may not have noticed an earlier chapter.

On the down side, serialized stories may be less effective if you’re a slow writer. That’s me. When I’m writing a story in installments, I’ve aimed for roughly a chapter a week in the past. This time around, it seems to be taking a couple of weeks. Hopefully my readers won’t forget what’s come before. In Peter Ackroyd’s mammoth biography of Charles Dickens, he recounts a scene in which Dickens, while in a bookshop, hears someone enquire of the shopkeeper whether the next installment of Dicken’s novel is available yet. Dickens gulped. He hadn’t started writing it. So, while your story is in progress, you do feel some pressure to release your installments on schedule.

Another danger of serial writing is the potential need to summon Captain Jack Harkness to retcon your readers if you discover a hole that can only be filled by adding or changing material in an earlier chapter. This hasn’t happened to me, at least not yet. You can reduce this risk by outlining before you start, but you can’t eliminate it.

As with many other things, serial writing is a tool. You can either experiment with it, or keep it safely tucked away just in case. I don’t know about you, but I find it hard to forever neglect the shiny tools in my toolbox.

1 thought on “Confessions of a Serial Writer”